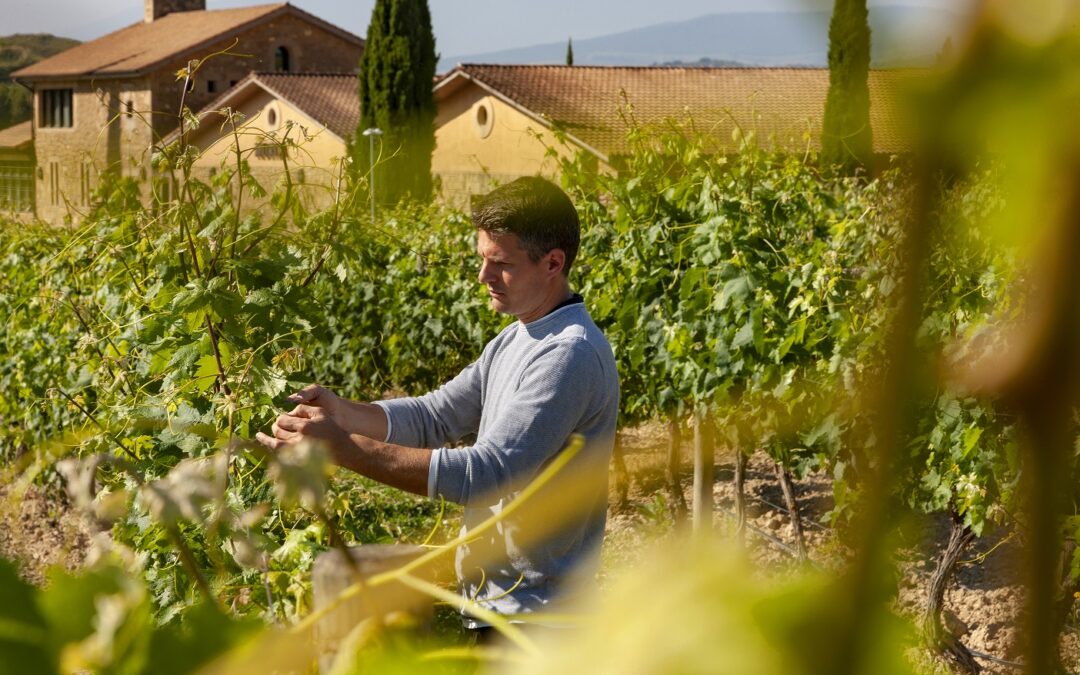 Masaveu Family Wineries shall begin to apply regenerative viticulture methods in the Murua Winery, in Rioja Alavesa, in an attempt to adhere to this winegrowing model which aims to regenerate the soil and combat climatic change by increasing the capacity of capturing carbon from the atmosphere, one of the causes of global warming.

In its first phase, the Project will be implemented in a plot called La Cruceta, situated in the southeast of the town of Laguardia, with a surface area of 10 hectares and an average production of 50,000 kg. Masaveu Family Wineries intends to use this plot as a “natural laboratory” and, in the future, extend the model to other plots and wineries after developing the pilot project in Murua.“Masaveu Family Wineries wants to learn from nature, to employ its own tools to aid vine growing”, outlines José Masaveu, managing director of Masaveu Family Wineries.

Regenerative viticulture, a widespread agricultural model in other countries of the world, but with little application even in Spain, seeks to adapt the cultivation of the vine to the natural ecosystem correcting the transformations carried out by man. It focuses on regenerating the soil, bringing it back to life, increasing its capacity to capture carbon from the atmosphere and reducing the concentration of this gas in the atmosphere, one of the causes of global warming. In order to do so, the model promotes the use of plant roofing, a key element in this transformation. Plant roofing protects the land from the sun’s rays so that the natural fertilization system is not damaged or broken. Plant roofing increases the soil’s capacity to absorb CO2 and, in the process, reduces erosion and temperature, decreases degradation and, above all, increases water retention in the soil.

In an aim to regenerate the soil, the following will be implemented in La Cruceta plot: sheep grazing, to transform the vegetation into natural fertilizer; nest boxes for birds and bats, for insect control; and support poles for birds of prey to control invasive species such as rats, rabbits, etc. The planting of 150 native fruit trees and shrubs shall give shelter to secondary fauna. The aim being to observe and understand the interaction with the vineyard, in order to develop the positive points and mitigate the possible unforeseen negative effects. For this purpose, they have established a current diagnosis of the plot and a study of birds and soils which will serve as a basis to determine and observe its evolution.

“The application of this winegrowing model shall allow us to manage droughts much better, increase the organic matter in the soil, increase water-holding capacity, reintroduce trees in the vineyard, welcome secondary fauna, halt erosion and enjoy better production and higher quality”,”, explains Mathieu Barrault, oenologist at the Murua Winery.

The project carried out in the plot shall at all times respect key aspects of the company such as the identity of the Murua vineyards, the quality of the grape, the viability of the company and the logistics of the tasks in the vineyard and their correct implementation.

The oenologist at the Murua Winery claims that several of the most prestigious wineries in France already apply this model. “There are studies that show that over 7 million hectares of vineyards around the world could make an impact on climate change by implementing regenerative agriculture”, he says.

The implementation of this pilot project is one more step along the path which began in 2021 with the application for organic certification at Murua winery and the efforts that the team of oenologists and other employees have been making to achieve an enriching ecosystem to benefit winegrowing. Currently, The Murua Winery has 60 hectares of vineyards registered as organic, representing 75% of the total surface of the vineyard, with the aim of reaching 100% in 2026. “The climate has an impact on wine production, however farming practices also have an impact on the climate, so we have set ourselves the goal of taking better care of our environment”, says Barrault.

As part of its commitment to regenerative viticulture, Bodega Murua has recently joined the the Regenerative Viticulture Association, created in November 2021 with the aim of bringing about a paradigm shift in the way vineyards are managed in Spain, to combat climate change, regenerate soils, halt erosion and encourage biodiversity.

Initiated by the Torres Family, Clos Mogador, Can Feixes, Jean Leon and AgroAssessor, the association was set up as a meeting point for wineries interested in regenerative agriculture, and was joined by Masaveu Family Wineries due to their conviction that the application of this method is beneficial for the environment, the vine and the wines.

The Masaveu family began to invest in the wine sector in 1974, when it acquired Bodega Murua, but the family’s vineyard plantations date back to the mid-19th century, specifically in Castellar del Vallés, where the family originated and where Federico Masaveu Rivell began the steps that his descendants would continue a century later.

Since then, Masaveu Family Wineries has grown to become a reference in the sector, due to the quality of their winemaking in several DO´s and their sustainable philosophy and utmost respect for the land in their estate owned vineyards, thanks to which they transmit the unique personality of each terroir in each bottle. In this way, each and every one of the Masaveu Bodegas projects in different parts and regions of the country are united in a common denominator: Murua (DOCa. Rioja), Fillaboa (DO. Rías Baixas), Pagos de Araiz (DO. Navarra ), Leda (Wine from the Land of Castilla y León) and Valverán (Asturias).