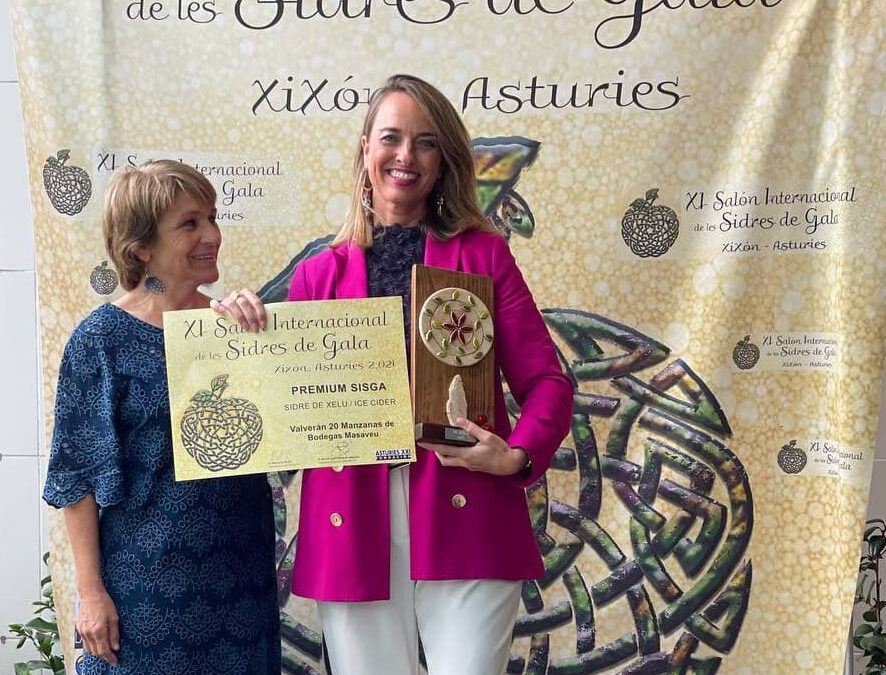 The International Cider Fair SISGA’21 has awarded Valverán 20 Manzanas the award for best ice cider this weekend. Yesterday, Sunday, the Awards for this fair, which this year celebrates its eleventh edition, were presented during a gala brunch that took place at the NH Gijón Hotel. A professional jury and a specialized tasting committee evaluated the 230 ciders from 73 participating producers from 23 countries.

This highly innovative product, which is produced by Masaveu Bodegas at its cider mill in Sariego, has been awarded numerous prestigious national and international prizes such as the Global Cider Masters 2021 or the International Cider Competition CINVE 2021 with the gold medal or the Nava Cider Festival 2021 as the best ice cider, among others.

Valverán was founded in 1998 as the first and most exclusive ice cider in the Iberian Peninsula. The name Valverán 20 apples comes from the minimum quantity needed to make each 37.5 cl. bottle, as it contains the concentrated must of at least 20 apples.

This drink is achieved after a complex freezing process at 20 degrees below zero, a subsequent fermentation for 10 months and aging on fine lees for between 10 and 12 months. The entire period is usually around two years from when the apples are harvested until that bottle reaches the final consumer, maintaining the initial fruit and sensory qualities.

To achieve this exclusive and appreciated product, the visionary character of José Masaveu, general director of Bodegas Masaveu, was needed, along with the effort and dedication of almost ten years of research and testing. This is the most personal project of this member of the Masaveu family and the only one that has its roots in his land, Asturias.

40 cultivated hectares, registered as organic, and located in the Protected Designation of Origin Sidra de Asturias, specifically in the Finca El Rebollar in Sariego (Asturias), shelter 20,000 apple trees that allow the production of 20,000 bottles of this distinguished ice cider full of nuances. They grow 11 different varieties on the farm, but there are five with which they make this ice cider: verdialona, durona de tresali, raxao, sources and collaos.

It can be defined as a sensual, fresh and surprising drink that harmonizes perfectly with foie gras, cheese and slightly sweet desserts.