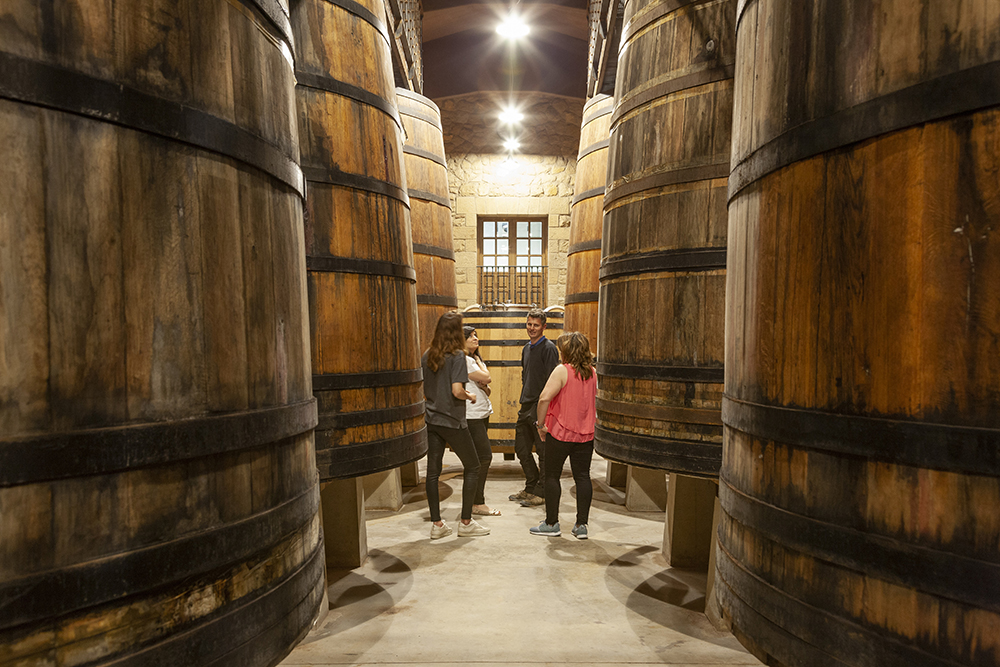 Bodega Murua, located in the Alavesa area of the DOCa. Rioja and belonging to Masaveu Bodegas, this summer has doubled wine tourism visits compared to the months of July and August last year, experiencing an increase of 103%.

To date, the percentage of people who have come to discover Murua’s wine tourism offer is 49% higher than the first nine months of last year, as a result of the commitment that the winery has made since 2020 to promote wine tourism in appropriate safety conditions and thus offer a wide range of activities for travelers around the world of wine.

The winery, located in the Rioja town of Elciego, has also recovered international visitors after last year’s parenthesis due to Covid-19. In fact, this summer three out of ten people who visited Murua came from outside of Spain. “These months we have promoted private visits as part of the security protocol and reactivated small events in the winery, which we suspended last year due to the health crisis ”, explains Chelo Miñana, director of wine tourism at Masaveu Bodegas. The very nature of wine tourism, which takes place in the open air, linked to rural areas and based on the enjoyment of the culture of wine integrated into the environment, the landscape and nature, has been a shock this summer for the traveler, who is highly sensitized even with the pandemic. ‘Wine tourism has been revived strongly and occupies a good position compared to other types of travel. We work with the hope that wine tourism will become a powerful economic, wine and social driver for Rioja Alavesa, since it meets all the conditions to have great growth prospects and be a value for the future.‘, adds Minana.

As part of its wine tourism offer, Bodega Murua has just extended hours and reinforced the wine list of the Wine Bar, which can now be located in different areas of the winery, adapting to the weather conditions and thus enjoying its charming and historic interior patio, the rooms that so lovingly house magnificent works of art, owned by Corporación Masaveu, or the extensive vineyards at the foot of Sierra Cantabria.

In addition to the Wine Bar, other experiences that Murua offers are the following:

In addition to enjoying the wine produced by the winery, the noble main building of the winery, which maintains the structure of the ancestral homes typical of this area of Rioja Alavesa, is another strong attraction for the visitor.

The interior of Murua allows the traveler to discover the exclusive library and its private art collection, owned by Corporación Masaveu, with sculptures, paintings and engravings from the 16th to the 21st centuries.

These exhibitions feature names of such prestigious artists as Miquel Barceló, Francisco de Goya, Álvaro Alcalá Galiano, Tomás Hiepes, Juan de Arellano, Fernando Álvarez de Sotomayor, Francisco Bores or Daniel Quintero, among others, whose works of art decorate the corners of the buildings that make up the Rioja winery.

The library is another treasure open to the eyes of the traveler who comes to Elciego. Unique in the Rioja Denomination of Origin, the venue brings together more than 2,455 books and magazines related to the world of wine from the 16th century to the present day.

The main authors of everything written about wine are represented in this library, be it from a technical or cultural point of view. They are scientific, literary, essay, legal, informative texts… In this extensive unique collection you can find the classic works of oenology or the most current ones published in Spain and other countries. Among the treasures housed in the Murua library there are very old manuscripts, testimony to the history of wine, such as the Libro de los Arbitrios de Logroño (1774-1796), vineyard purchase-sale deeds dating from the 17th century or facsimiles of rare and out of print titles and first editions.

Murua, a winery belonging to the Masaveu Bodegas wine group, is located in the beautiful town of Elciego, in the heart of the Rioja Alavesa.

The Masaveu family established this winery in the seventies and Murua currently produces 250,000 bottles made with a raw material that reflects the respect for the land that defines the winery group present in different strategic areas of the country: Murua (DOCa. Rioja), Fillaboa ( DO Rías Baixas), Pagos de Araiz (DO Navarra), Leda (Wine from the Land of Castilla y León) and Valverán ice cider (Asturias). Since then, Bodegas Masaveu has grown to become a benchmark, for the quality in the production of its wines in different DO’s and for the environmental philosophy that they demonstrate and the maximum respect for the land, in which it has its own plantations. of vineyards, thanks to which they manage to transmit, in each bottle, the unique personality of each terroir.